I was checking out the hitwise blog, and came across an interesting post centered around the traffic growth of *shudders* Perezhilton.com… and no, i am not linking to it!

Anyway, the interesting thing about the post is that it states that according to hitwise numbers, Perezhilton.com now generates more traffic from Facebook than it does from Google searches.

Last week, 8.70% of visits to PerezHilton.com came from Facebook compared to 7.62% from Google. The switch happened the week ending December 27th, 2008.

then in the comments, someone else confirms that…

It’s a similar situation in the UK: 2.5x as many searches for Perez than Paris last week. 19.1% of Perez Hilton’s traffic from Facebook, just 12.0% from Google UK and 2.3% from Google.com

Now what else is interesting is that Facebook now accounts for about 3.3% of all traffic driven to video sites, Hitwise have provided the following handy dandy trend graph. 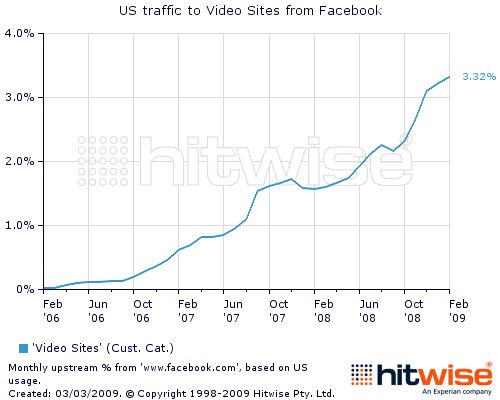 So to sum up the point of this post, whilst it may still be difficult to attract Facebook users to buy products from your site, it should certainly not be overlooked as a means to generate traffic to information based sites or blogs. I imagine that this trend will continue to rise, especially as Facebook look to launch its new real time homepage later today