Update: So after tweeting about my blog post a few people retweeted, now VModa have sent an @reply to myself and some other people saying that we won the beanie competition. Did I jump the gun and write this post too early, or did the very essence of me writing this post make VModa sort it out? I don’t know but props to them for getting it sorted anyway, and tbh i do like their headphones 🙂

So a few months back i bought a pair of V-Moda headphones, i would link you to it but i can’t be bothered to create an Amazon affiliate ID so you can search it yourself 🙂 Err, anyway, yeah back to the blog post. So i bought these headphones and had some problems with them, as such i decided to follow @Vmoda on twitter and send them a tweet about how my headphones had messed up and i wanted them replaced.

Everything was all good and i got them replaced, but i kept an eye on V-Moda to see how they were marketing their products on Twitter etc. So yesterday they create a tweet saying “Win a V-Moda beanie! First 5 to answer this. What are the ones and two’s”?

Well the obvious answer is that they are decks. Never being one to pass up on a free beanie i decided to answer, to ensure i didn’t miss out i decided to do a search for @vmoda n see who else had managed to respond, looks like i was the 2nd to respond but the 1st with the right answer (I ROCK! – see image below). 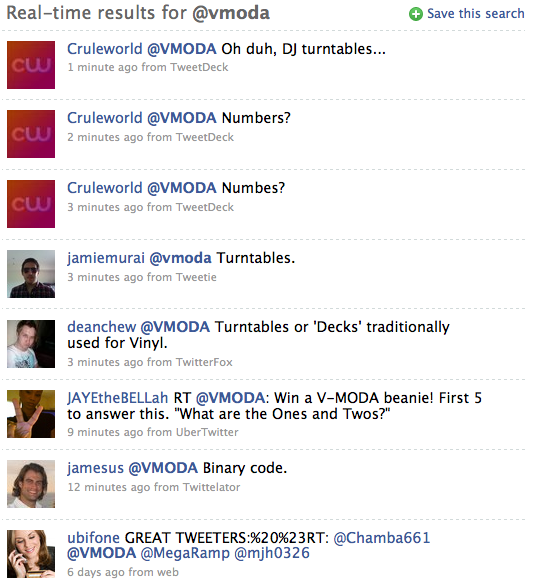 So looks like i have won a beanie hat right? Errrr wrong. I sent ANOTHER tweet to V-Moda jokingly asking “where’s my beanie” but they didn’t respond. Regardless of the glorious London sun at the moment I wanted my free prize, so checked twitter today to see if there was any response from V-Moda, none! I thought well i will check their Twitter page, see if there is any announcement about it… err none, and what’s more they have DELETED the original tweet (FAIL! – see image below). 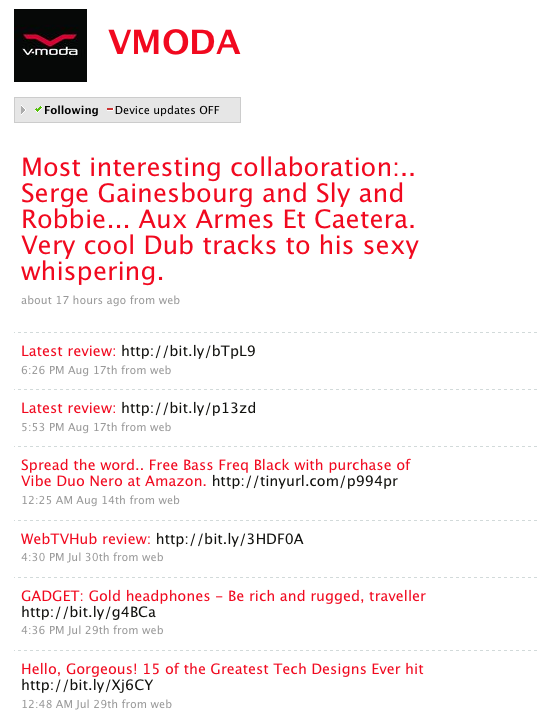 Now i know that the prize was a a shitty beanie, and i know that perhaps someone decided to do such a thing without permission from their elders, however, if someone in your company created a little competition for a prize which probably cost about 0.00000000000000000000001% of your daily turnover, then it is advisable to at least see it through and NOT cover up the evidence that you ever tried it.

I feel cheated out of my beanie hat V-Moda, but more importantly, I think it sucks that you pulled a social-media-back-peddle stunt like that.

Checking out the twittersphere, and still LOVING real time search,  (which i spoke about in my SMX Presentation btw). I found that quite a lot of people have upgraded their iPhones to firmware 3.0. When i say “quite a lot of people” i actually mean Apple fanatics that have been tweeting up to a bazillion messages an hour, counting down the seconds until Apple released firmware 3.0. I would be one of those people but i am waiting to see what the iPhone Dev Team release until i take my next steps 😉 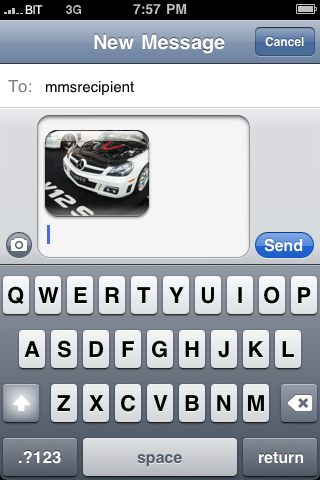 In a blog post i wrote last November about How to get MMS working on the iPhone with O2 i stated that iPhone contracts aren’t set up to actually send the MMS message to the device. Instead they hold the message on the internet and send you an SMS message to tell you how to access it using your browser. This indicates that all those contracts would have to be updated to allow MMS message to be sent directly to the device, and of course, O2 would have to send the MMS settings to the iPhone using an over the air update.

This seems to hold somewhat true as many users are tweeting that they couldn’t send MMS message until a text came through from O2 with the MMS settings.

So, if you are having problems, i am afraid your just going to have to wait until O2’s computer gets round to your ‘contract’ and sends you the settings message, then you’ll be MMS’ing in no time.

Oh, and for those that are wondering, the cost of sending an MMS message on O2 with the iPhone is the same as sending 4 SMS messages. That will either be taken from your free text message allowances or, i assume, be charged at 40p 25p (thanks Finch) if you have none remaining for that month.

Some people have also tweeted that you can just send an MMS to 0101 or 1010 and O2 will update your settings. Although i obviously haven’t tried that.

Bonus tip: Want free teathering with your iPhone instead of having to pay out £15 a month? Check out this post on how to do it for free