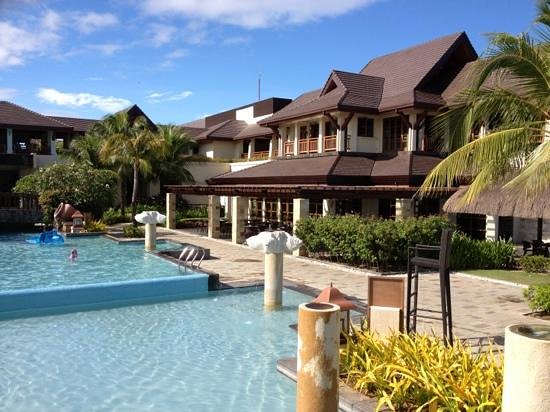 Great layout, Villa’s are nice, staff quick to allow rain to close everything.

I’m not long back from Crimson Resort, so this is fairly fresh in mind. We stayed in the Pool Villa’s, which are a bit more expensive than the standard rooms, but all situated in the same sort of area. I will say that I have stayed in numerous villas across a bunch of different Philippines resorts, and these were by far the best.

The layout and size of the villa are absolutely perfect, along with the walls being high enough that they remain private whilst still being easy to access. The plunge pool area is a little sparse with only a “naked” double reclining bed that you see along the pools, but the area does get sunlight nearly all day, so it is fine to relax in the privacy of your “home”. The rain shower in the bathroom could do with being more powerful, but it does have a dedicated bathtub to soak in.

I absolutely loved the layout of the actual resort, especially how the dedicated beach bar had an “infinity” view. The beauty of the layout also meant that for childless couples like ourselves, we could head away from the main area and relax without the worry of being bothered by the playful noise that children make.

With all that being said, I was pretty disappointed that the staff is far too quick to close this area entirely at the slightest drop of rain. For instance, it rained a little around 3 pm one day, and it was obviously forecast to rain further. Instead of just risking it and closing the area when it did rain, they just shut the whole thing down for the afternoon/night and that was that. Also, all bar areas close strictly at 12 midnight (2 am on Friday and Saturday), which made me frustrated. Why the distinction between a weekend and a weekday when you are a resort and people are there over the holiday period?

The other bar, which is inside the resort, is named the sports bar. It had a couple of decent-ish pool/billiard tables, but the pool cues could have done with some love. It also had an unusable darts board. Unusable, because the thing has been hammered for 3 years without being replaced and none of the questionable darts would even stick into it. I asked the bartender about this and he said they have requested it to be replaced, but it never has… can management really not afford a few dollars to replace a darts board?

You can also forget about watching any Western live sports (except basketball) in the sports bar as all they have are local cable channels. Again, with the instances closing exactly at 12 midnight, you wouldn’t be able to catch much sport live anyway. Despite the last couple of lines sounding negative, the layout of the sports bar was very nice but should be called a games room as opposed to a sports bar.

The internet was way below what I would expect for a resort of this size. My iPhone 7 would often drop from Wifi to it’s own LTE due to the wifi signal not being strong enough. And when you were connected to Wi-Fi, it was slow, maxing out at around 120kbps when it wasn’t dropping out. Fine for perhaps checking the weather or firing a few quick emails, but not so good if you wanted to get some heavy work done. On that note, Globe’s cell phone reception is almost nonexistent in the villa we stayed in and barely got above 2 bars (3 at a push). They could probably do with a couple of cell towers to cover the resort.

The beach is nice enough, with a nice private area for people to sit down and swim in. Visitors of other Lapu-Lapu resorts will note that the area is rocky, so don’t expect talcum powder sand. The drop into the sea is pretty shallow too and the local fish come close enough that you can get a decent enough experience when snorkelling.

The pool is nice, 3 tiered, but is woefully lacking the number of chairs/beds needed for a resort of this size. You need to be up early to make base by the pool, and due to the way the resort is designed, you are going to constantly get foot traffic walking by your head no matter where you are situated. Families will often venture from the dedicated kids’ pool, which can be frustrating when you are trying to relax, but such is life.

The food is pretty good — not amazing, certainly not poor. I like the Indian fusion that is apparent in the menu, but it does lack the wide choice that you would perhaps find at other places. Unfortunately, I had a nasty bout of food poisoning from a room service burger, and to be fair to the resort they were on the ball on correcting the issue. The head chef came to me personally and was obviously very upset that this sort of thing happened and the director of food arranged for us to have a free spa treatment in a packed spa as compensation for the issue. I have stayed at places in the past where just having an issue like this would have made my blood boil, but it was handled with so much care that I found I could let it slide.

The staff is very friendly, as you would expect from Filipino workers, but they shone here compared to other places with being able to answer all questions and checking on ways to have custom meals or drinks, as opposed to just saying “not possible”.

Travel time from the airport is about 25 minutes, so you can fly from Manila to Cebu and get to the resort in the morning and have the afternoon to yourself.

I would recommend this resort to my friends. It’s fine for couples, and families are well taken care of with its kid-friendly focus.