Its been a long time since i blogged here. Its kinda weird ya know, if i get a nice little run going then i really get into blogging, but if i stop for a month or so whilst i am trafficking small children across the globe it kind of ruins my stride.

Silly jokes aside though, i just read a post on Mashable which reaffirms what I have been saying for ages when i have been championing technologies like Facebook connect. Users who visit your site from Social Media websites are loyal and they will return, why? Because they probably found your site through a friends recommendation, and people are friends because they have things in common, well either that or they have lots a chocolate chip cookies that they like to give out.

Since i am lazy and i have said all i want to say at 17:24 on a Tuesday afternoon, i am just going to quote the Mashable post about this…

That’s the subject of a new study by ad network Chitika, who analysed the browsing habits of 33 million unique users over the course of September.

According to their findings, Facebook provides the most loyal visitors, with 20% of those that originate from the social network in turn visiting the site they landed upon four or more times in a week. Among other social media sites, Digg traffic produced loyal users 16% of the time, while Twitter traffic was only good for 11% loyalty.

In the realm of search engines, Yahoo provides the most loyal visitors at 15%, followed by Google and Bing with around 12% each. 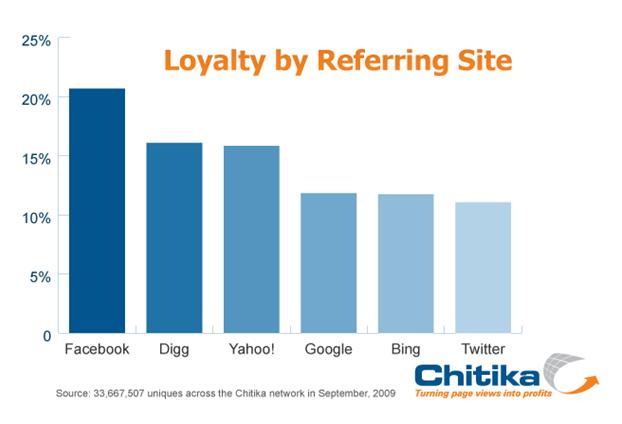 So just remember, it is always worth having a presence on social media sites, just make sure you do it properly.

When i wake up at morning.My first work is to open the facebook website and stating chatting with colleague and relative.